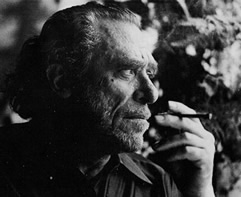 "Some writers tend to write what has pleased their readers in the past. They hear accolades and believe them.

There's only one final judge of writing, and that is the Writer.

When he is swayed by the critics, the editors, the publishers, the readers, then he is finished.

And, of course, when he is swayed with his fame and his fortune, you can float him down the river with the turds." ■

What I hear this man saying is » we ultimately COMPETE WITH OURSELVES. So let us challenge ourselves .. and try to perfect ourselves, our craft, our gifts, our calling, our souls (.. and by extention » our nation and our world).

And not be satisfied with mere popular acclaim or financial success (.. which uh, does not seem to require very much of a human being these days. At least not in the way of morals).

That we should continually challenge ourselves to do the right thing .. regardless the discomfort this might this bring.

Never settle for anything but your absolute best. Because » "there is no other feeling like that. You will be alone with the gods. And the nights will flame with fire. You will ride life straight to perfect laughter."

Compare Bukowski's quote here with what Hemingway wrote to his publisher.

» The Greeks Want to Meet You

The quote listed at the top of this page also makes me think of what Jesus said .. when his followers (Andrew and Phillip) came and told him » "The Greeks want to meet you."

He basically said (paraphrasing) » "It's time, my friends .. time for me to die."

In other words, his fame had spread so far that even foreigners were looking for him. So popularity seems to come with a cautionary tale .. because, for Jesus, this was the beginning of his end.

By the way, verse 24 is found on Dostoevsky's tombstone. It is also the tone-setting quote that Dostoevsky uses to open his masterpiece about Dmitry, Ivan & Alexei » the Brothers Karamazov.

I love this guy. Bukowski. (Cool name.) The dedication. The obsession. The passion. The tenacity. The insanity. His sense of humor.

He says a lot of crazy shit, too, that just I let go. I mean, you gotta kinda expect it .. given the territory. Given the mind. And where it has been.

He has dozens of quotes .. that are priceless. Bukowski lets you know that it can be fun to lose your mind. =)

Bukowski nearly made me pee my pants .. while I was reading the Post Office (.. the part where the growling German Shepard buries his snout in Buk's crotch. One chomp away from Eunuchsville). I nearly pissed myself.

It might be worth comparing Bukowski's quote to the one uttered by Prince Charles and even this one by Einstein. Do they all manage to hold the same theme?

I took particular note of something Bukowski said » "You either get it down on paper, or jump off a bridge." He said this in response to a question about how you know that you're a writer, which seems to jibe with what Elie said.

I could write volumes on this topic, and may indeed do so some day .. but for now I will simply say that the 'feeling' is one of » increasing constipation .. until you can no longer stand it (.. and go "jump off a bridge").

It feels like you cannot stand yourself. No, it is not a pleasant feeling.

For me, I dont much care whether anybody else reads what I have written .. as long as it has been publically published, which is no problem with the advent of the Internet.

In fact, part of me would actually prefer that less-rather-than-more read what I wrote. (Because then I wouldnt get bizarre comments from bizarre people.)

Most writers who I know personally do not feel this way. They need others to read their stuff in order to feel validated. They are like what Hemingway said about Gertrude Stein »

» But she disliked the drudgery of revision and the obligation to make her writing intelligible, although she needed to have publication and official acceptance.

Her book began magnificently and had great stretches of brilliance, but went on endlessly in repititons that a more conscientious and less lazy writer would have put in the waste basket. For publication in the review, I had to read all of Miss Stein's proof for her as this was a work which gave her no happiness.

I dont need to be validated (by others). I just need to write (for myself) .. to continue to push that envelope and grow in skills and techniques.

I figure that the proper government agency will forward my views to the proper decision makers.

If you make predictions and your predictions start to come to pass .. people will start to pay attention .. even when you prefer they dont.

When they tell me that the Greek's are here, I say, "Tell them I'm not here."

This here is another quote from Bukowski that made me think » "And yet women—good women—frightened me because they eventually WANTED YOUR SOUL, and what was left of mine, I wanted to keep."

When I first read this quote, I thought Buk was only kidding.

Okay, I will leave you with one final quote from the Buk-meister that makes me think » "Writers are DESPERATE PEOPLE and when they stop being desperate they stop being writers."

I need to think some more about what Buk said there .. but, for what it's worth, I can relate to the desperate.

Intuitively I feel that, what he's getting at .. is that the writer needs to disconnect from any and every false sense of security .. in order to go where he needs to go.

The more he is rooted to a comfortable sense of security .. the less likely he is to boldly go anywhere. The desperate man will do things (and go places) that the non-desperate man would never even dream of.

And if you are not willing to go to the ends of the earth, into both heaven and hell itself, if necessary .. if you are afraid to confront your biggest fear .. then you got no business with a pen in your hand.

To throw some contrasting light .. is not love-making best when you loose all attachment to everything else? .. except the other person? .. like you're out there exploring the universe (together).

Fear is always a hinderance to intergalatic travel. That's why lovers need to be brave.

For more along these lines, here's a Google search preconfigured for the query » charles bukowski quotes