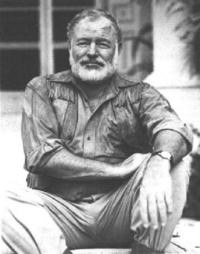 "In those days it was no disgrace to be crazy, but, on the other hand, you got no credit for it.

We, who had been at the war, admired the war crazies, since we knew they had been made so by something that was un-bearable.

This passage refers to Hemingway's early days he spent living in Paris as an American expatriate during the 1920's following WW I, a particularly nasty war. "The War to End All Wars" Yeah, right.

This was the quote that came to mind when I heard the (heartbreaking) news about » Aaron Swartz.

Some people call this the "War crazies" quote. For extra credit go to this page that describes the painting by Vincent van Gogh titled » Eternity's Gate (1890) ..

.. and compare Vincent's quotes there with what Hemingway said here (above).

We are talking here about » mid-Fin de siècle [pronounce], an interesting period ..

.. characterized by » ".. boredom, cynicism, pessimism, and a widespread belief that civilization leads to decadence." (Whoa, dude.)

It is easy to become a fan of Hemingway. There is something about him .. that when you read him .. or even listen to an audio book of his work .. that you feel like you GET A SENSE of his soul.

Now yes, this happens, to a degree, with all writers. I mean, it is difficult not to (.. get a sense of their soul).

But with Hemingway .. this happens to a surprising degree .. almost as if it were magic.

And part of this cool-thing-that-happens is because he » demonstrates .. what he means. Tho I find it challenging to describe precisely what I mean by that.

Hemingway also does some neat looping .. front-n-back .. in the story .. that is not only clever but also very cool. Kindly foresight. Thoughtful consideration.

Hemingway actually gives me strength .. tho I'm not sure how he does it .. cuz I can see no obvious cheerleading or blatant encouragement.

Perhaps it is the sense of certainty that I get about life from Hemingway (.. similar to what I get from Einstein).

I like this quote because .. sometimes I feel like I am that "finer-or-more-fragile metal" to which Hem refers. [ And yes, I know for certain that I sometimes see too clearly. ]

Regarding the quote specifically, I don't think Hemingway 'admired' the war crazies. I think what he was trying to say .. was that .. he 'respected' them. Does this not seem the case?

And here's what's even cooler » that respecting the war crazies .. is itself » admirable. No? Yes.

Hemingway blew his brains out at age 61 in Idaho. Talk about going out with a bang. Hunter Thompson (Gonzo), same thing. Would appear they'd had enough.

For more along these lines, here's a Google search preconfigured for the query » ernest hemingway quotes