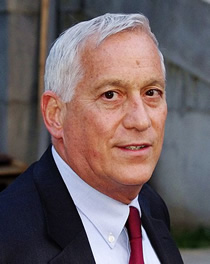 "Looking back at a century that will be remembered for its willingness to break classical bonds, and looking ahead to an era that seeks to nurture the creativity needed for scientific innovation ..

.. one person stands out as a paramount icon of our age: the kindly refuge from oppression whose wild halo of hair, twinkling eyes, engaging humanity, and extraordinary brilliance made his face a symbol and his name » a synonym for genius.

Albert Einstein was a locksmith blessed with imagination and guided by a faith in the harmony of nature's handiwork. His fascinating story, a testament to the connection between creativity and freedom, reflects the triumphs and tumults of the modern era." ■

Here's another quote from the inside flap »

"How did his mind work? What made him a genius? Isaacson's biography shows how Einstein's scientific imagination SPRANG FROM the REBELLIOUS NATURE of his personality."

Okay, one more .. which should encourage every young person »

"He was in the process of revolutionizing physics, but he had been repeatedly thwarted in his efforts to win an academic job or even get a doctoral degree, which he hoped might get him promoted from a third- to a second-class examiner at the patent office." ■■

An entire paragraph pulled from page 2 of Walter's biography on Einstein » Einstein: His Life & Universe. From the chapter titled » The Light Beam Rider.

What a book! The further I investigate this 550-page puppy, the more remarkable this biography becomes. This thing is a finely-crafted piece of work. Einstein is a fortunate man to have Walter writing his biography. (But not as fortunate as you & me.) 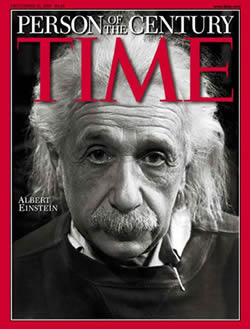 I have much to say about this quote, and why I selected it (quite unexpectedly, I might add) for Rad quote #5 .. and especially I want to talk about the connection between creativity and freedom and imagination.

But right now I merely want to post it. Later I will add my commentary. I can feel stuff stirring around inside there, so I'm interested to what comes out and how it develops.

So impressed am I that I have already suggested that Obama have Walter write his biography .. post 2016. And we want to know all the dirt, too.

But first I would like to recommend (most highly) the audio book by Ed Hermann. It is simply the best voice / recording I have ever heard, and I have heard many audio books. Truly a fabulous piece of work .. in so many ways.

But nothing felt rght .. until I read this chapter in Walter's biography. It totally resonated with me .. on multiple levels. I knew right away that it had to be Rad quote #5. Sometimes you just know .. when something feels right .. feels perfect .. fits perfectly. 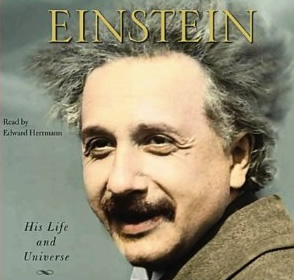 There are many little artisitic things I find in Walter's bio that resonate ..

.. such as the way he put on the cover a photo of Einstein where his eyes are toast (probably from reading too much) but he looks happy and content. Beautiful, subtle. It speaks.

Notice how he uses a gray background, which has the effect of muting his wild (gray) hair from the photo, thereby focusing your attention on the eyes (.. the windows to the soul).

I will continue to add insights here as time permits. Einstein laid the smack down on Newton. Newton!

What balls. What incredible balls. Cojones grandé supremo. No respect for authority. "There's a new sheriff in town, boys." And he takes no prisoners.

Along these lines of Einstein's mind-blowing ideas, you may enjoy Larry's Coursera course on Special Reltivity. Larry is a profesor at Stanford.

Read for yourself the letter for yourself .. that Einstein's dad wrote for/about his son Albert. You be the judge.

"a few words of encouragement, so that he might recover his joy in living and working."

Which reminds me .. that Spielberg was twice turned down to the (prestigious) USC School of Cinema. So he went to Cal State Long Beach instead.

I know that the quote at the top of this page is very good, very inspiring .. but I have another for you .. that is so good I could give it its own page. But I will just add it here for now.

It comes from chapter 3, titled » The Zurich Polytechnic (1896-1900). This passage captures probably the best/strongest way that I resonate with Einstein.

If I find something else, I will return here to tell you what that other thing might be. But so far, this is it. I hope you like this passage as much as I do.

I have lots of respect for Walter. This thing, his book, his bio of Einstein .. it is like an engineering marvel .. that awes and inspires you.

I am not normally a jealous writer (cuz I am so good myself, so sassy, so irreverent, so clever, so gifted, you know) .. but I actually caught myself feeling a twinge of jealousy while reading this thing ..

.. not only how he got to write about Einstein, a fascinating major historical icon himself .. but also how he is able to capture his essence. Walter totally kicks ass there .. to a surprising degree.

All of which is so marvelous that you hardly even feel worth mentionng how well the sentences and paragraphs are crafted .. down to individual word selection. Super juicy nectar.

I mean, just copying his snippets of text for this page, I find myself sayng to him » "Dude, you kick ass. You kick serious ass."

If he did not agonize over this thing .. for a long time .. then I would be very jealous. Anyway .. I did not mean to say that about being jealous of Walter. Rather I meant to give you a passage that inspired it. Here you go:

Notably absent from Weber's lectures was any exploration of the great breakthroughs of James Clerk Maxwell, who, beginning in 1855, developed profound theories and elegant mathematical equations that described how electromagnetic waves such as light propagated. "We waited in vain for a presentation of Maxwell's theory," wrote another fellow student. "Einstein above all was disappointed."

Given his brash attitude, Einstein didnt hide his feelings. And given his dignified sense of himself, Weber bristled at Einstein's ill-concealed disdain. By the end of their four years together, they were antagonists.

Weber's irritation was yet another example of how Einstein's scientific as well as personal life was affected by the traits deeply bred into his Swabian soul: his casual willingness to question authority, his sassy attitude in the face of regimentation, and hs lack of reverence for received wisdom.

When his frustration finally overwhelmed his admiration, Professor Weber's pronouncement of Einstein echoed that of the irritated teacher at the Munich Gymnasium a few years earlier. "You're a very clever boy Einstein," Weber told him. "An extremely clever boy. But you have one great fault: you'll never let yourself be told anything."

There was some truth to that assessment. But Einstein was to show that, in the jangled world of physics at the turn of the century, this insouciant ability to tune out the conventional wisdom was not the worst fault to have. ■■■

For more along these lines, here's a Google search preconfigured for the query » walter isaacson quote einstein biography